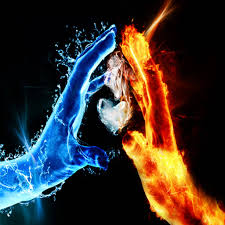 The twin flame is often represented by the pairing of two souls. At one time, people believed this to be the “Love at first sight” perfect partnership, many seek for their whole lives. I hope that I have changed that outlook with some real talk, in the first article that was posted. In that article, I explained how the twin flame, is really the mirror reflection of your soul. This means, they are your other half, but the total opposite of who you are, in order to learn lessons in duality.  I also went into elaborating on the subject of fated lovers too,to shed more light on this subject. Today, I want to go into it some more by explaining the lessons that are learned in transcending the twin.

In the journey of the soul, at Creation the soul divides in one or more parts, to have many experiences to learn. Each will take turns in flip flopping through the lessons. One life time you will be good, and they will be bad. One life, you may be female/male, and they will be the opposite. You will have lessons in love by having many partners, and they will have a lesson in being alone, by having none. You will learn endurance and courage by having trying lessons and hardships, and they will be learning the easy way. Some may be selfish, while you are so giving. And, you may be self focused, while they are selfless. It is all a part of the lesson. Most souls have a twin flame, except souls who were made all knowing already, as they would not need the other half of the separated soul, to learn for them, so there is no point in gaining one.High ranking angels usually do not have a twin flame. Earth angels having a lesson in solitude will not either, not for that lifetime at least. Some can manifest a twin flame of their own while incarnating into a life time too For example, if that soul does not have a flame, due to their station or rank in the heavens, then they can create a soul out their own energy if their energy is large enough to spare some intelligence to make a while other soul. I did this with my twin flame. However, I have quite a horror story with that situation, that I will speak about at the end of this week, to complete twin flame week. Along with some other fun facts. But yes, I made mine for this life so I could have kids that would be more like me, in certain attributes.

They have their own soul, but a contract spiritually in the consciousness I have given to them, through DNA. My flame disappeared from the scene once the purpose that I needed him for, was fulfilled. While technically this is not actually a twin flame, I still call it that as it is a manifestation of my own will. In truth, that would be called a “Manifested Soul Mate”. Some twin flames will come together on their paths even if they were not meant to be together on that particular path. They do hold each other back a bit.That is because when twin flames meet, their destiny has to be heading to the same future outcome through their contract. If not meant to be together on that path, then their paths will not be heading in the same direction, because they will have had individual paths to take. If they met, it was for a brief lesson, but always for life.With paths going in different directions, one will end up sacrificing theirs for the other so as not to be apart, or pulled in two different directions. One will be sacrificing more than the other. In lifetimes; where they were meant to be in it for life so to speak, than their paths would be consistent with one another’s, going towards the same outcome and destination. All aspects of their lives (even with trials), will fit somehow for the overall purpose of their meeting and joining together.

In cases where it’s not meant to be for the entire lifetime, one will be jipped out their goals and destiny to follow the other. They will not be able to leave them long enough to pursue their own personal endeavors like traveling far away to college, while their twin is meant to stay where they are for education. Or, they may be pursuing a career, while their twin disagrees with it, or they have their own career where they will not be in the same area. They may miss another love that they were meant to have, after having met their twin and learned from them. Or,  they may have been destined to never be together at all, and they somehow cross paths merely because since they are twins, they chose to be in the same vicinity, but not end up together. And because of that, they may lose time with other loved ones, alone, or with friends that they have a contract with to help. This is because the twin flame relationship is a powerfully binding one. The soul tie is so strong with the twin flame, that the only way to be free of it, is to release the soul from their duty to your learning path. Or, you need to ignore the strength of the energetic pull, and let go to seek out your own path no matter how hard.

The whole point is that you and your twin flame learn from one another, no matter how brief, or how long you are together. But if it is not meant to be for the present life, then let go so that you learn and experience other things. Without doing so, you not only affect this life, but your future ones due to missed lessons outside of the union, and within it too. What you learn now, will help you in the twin flame relationship later on.  If you are destined to be with your twin flame, and for any reason feel that the trials are too much to handle, and want to in fact let go, then do so as well.   Make sue, as one person’s spirit guide told them, to leave on good terms though. This way you can avoid having worse karma later on. This makes sense as you would not want to have another negative experience due to their differences, but instead to transcend the karma.

Some have said that the twin flames will look similar in appearance to one another. This is also another falsehood. Instead, they will have features you normally would not go for. Then, you fated lover will be the one who has the traits that you desire. Your twin flame makes you explore parts of yourself, that you never expected or imagined. Even your opposites in taste. It is passionate though, infused with a bleeding heart. It has a deep love, sometimes not spoken. Your twin may not be affectionate, or open in their feelings, if you are. And due to this, you may be looking for someone who is. This may make you question your relationship and desire to seek out a new mate who fulfills what is missing. However, later in life, you will come to find that it always goes back to the twin flame, after each failed relationship. Because, the twin gives you one thing no one else can alone. A best friend and a worst enemy.  Some one who you can tell anything to, but also  taunts  places within that get your blood boiling. And this is a test for you in this tough relationship.

Appreciate the complexity of this union. Because no matter how great other relationships are, your twin will make you question yourself, your life, your choices, your future, beyond many limits.   Eventually, this will lead to growth within yourself, and within one another, to where now, you can be in equal understanding. That is transcending the flame…